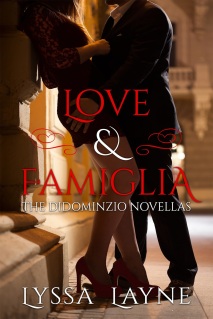 Love and Famiglia
The DiDominzio Novellas
Lyssa Layne
Genre: Contemporary Romance
Date of Publication: 3/13/2017
ASIN: B06VVKY7DV
Number of pages: 400
Word Count: 157,013
Cover Artist: Amanda Walker
Book Description:
Meet the DiDominzio family—fiery, loud, Italian. Francesca, Antonia, Gianna, and Carmine were raised by their strict, old school Italian father. Each sibling has their own journey but how they find their happily ever after definitely isn’t easy.
The King and the Pawn – Francesca, the baby of the family, wants nothing more than to fulfill her dream of being a fashion designer. Unfortunately, Papa DiDominzio will stop at nothing to squash her dreams and lead her toward the traditional career of the women in their family. Francesca concocts the perfect plan to bring home a man her father will hate in hopes that he’ll make a deal so she can still reach her dreams.
Not in Love – Antonia, the sexy second to youngest DiDominzio, exudes nothing but sex appeal, especially with her non-traditional blue eyes. After dating one man after another, Antonia thinks she’s finally found the man of her dreams until she realizes the one she really wants has been right in front of her since they were children.
One Day as a Lion – Gianna, the eldest DiDominzio sibling, is the only one that has followed Papa’s wishes by marrying an Italian man and working in his restaurant. While her brother and sisters suspect something isn’t right with her marriage, none of them can prove any differently. However, there is one man that will do everything in his power to save Gianna from the man she calls her husband.
Destined For You – The only male sibling, Carmine is more like a second father to his sisters than their brother. There’s only two things that are important to Carmine-his family and his club. Keeping up with his sisters and running his successful business leaves him no time to find a mate. As luck would have it, fate falls into his lap, changing his world, in more ways than one… and not necessarily for the best.
Available at Amazon
Get the first book in the series,
The King and the Pawn,
for FREE at Amazon

Excerpt:
“But, Papa, this is the opportunity of a
lifetime! Do you know how many aspiring fashion designers have the chance to
build their own line of clothing at only twenty-four?”
Desperation.
Yes, there’s definitely desperation in my voice, but there’s nothing left. I’ve
begged, I’ve pleaded, I’ve cried, but nothing has broken my father’s old-school
Italian demeanor. This is a last ditch effort to convince him to sign off on
the trust my Noni DiDominzio left for me so I can fulfill my career aspiration
of my own women’s fashion wear. My boss is moving to France and has offered me
to take over his line, giving me free reign on designs. All I have to do is
come up with three months rent and it’s mine.
“Francesca, in
nine months, the trust will be yours to do as you please. However, I suggest you
look at how your siblings used their inheritance. Their money was used to buy a
house, a car, even start a business which is how Noni intended for you children
to use it.”
I throw back my
head and let out an exasperated sigh. Lifting my head up to look at my father,
I take a deep breath, knowing that I’m walking on thin ice. My father, Andrea
DiDominzio, is Italian through and through. He’s got the full head of dark
hair, the olive skin tone, brown eyes, and the man sticks strongly to his
Italian beliefs despite the change in times. My siblings and I look exactly
like our father, except for Antonia, my middle sister, who has blue eyes.
However, we all share the loud, feisty attitudes which we’ve inherited from our
father, his father, and his father’s father. Being the baby of the bunch, I
have to fight louder than the others to be heard, but it still doesn’t mean I
get my way.
Speaking calmly,
I nod, “I would be doing the exact same as Carmine. He used his money to buy
the nightclub. I’ll be starting my career with Noni’s money. Papa, this is just
the beginning of what I can do with my skills.”
Papa leans back
in his plush leather chair on the other side of his desk, his fingers steepled
together. He’s not smiling with his lips but I can see it in his eyes.
“Francesca, you know I don’t agree with your choice of profession and I can
assure you Noni wouldn’t either. When you turn twenty-five, the money is yours
so you can do as you please then.”
“But, Papa, the
opportunity will be gone by then and I’ll be out of a job!” I stomp my foot
like a child not getting their way.
“Mia figlia, you
know that you always have a job at the restaurant which would be an excellent
place for you to meet a good Italian man to settle down with.”
He’s smirking.
The man is seriously smirking at me while he stomps all over my dreams. I’m not
even going to entertain his suggestion. Turning my back, I grab my jacket off
the chair and mutter under my breath in Italian.
As I open the door, my father calls to me.
“Francesca, ladies don’t speak that way. I’ll see you in a few days at our
Christmas celebration weekend.
With a huff, I slam the door to his office and
let out a scream. My father is infuriating but I’m not giving up on my dream.
One way or another, I will have my clothes in a show in New York Fashion Week.
Just wait, Papa, I’ll make you proud despite not having your blessing.

Love & Famiglia is a set of novellas that tell the story of the DiDominzio siblings and how they went through everything that was expected out of them in order to find their place and happiness. Let me be honest, I don’t normally read a whole series when each book talks about a different couple. Nevertheless, this one was way too tempting. I do have a think for Italian’s and their intense personalities. The first three novellas (The King and the Pawn, Not in Love and One Day as a Lion) talk about the three DiDominzio sisters. Each is unique, in her own way, and will pull you into the story from the very first page. Personally, I fell a little more related and attached to Francesca and Gianna. The first one is trying her best to accomplish her dreams even though she has her doubts about having what it takes. The latter does as her papa wishes, doing what is expected instead of finding her own happiness. I believe that a lot of women have felt this way before, therefore, making it very easy to relate to these Italian ladies. The difficulties both of them face will pull your heartstrings.
I must warn you, though. These novellas deal with some difficult themes such as domestic abuse, violence and self-doubt, among other things. I must confess I did shout at some characters for withstanding so many hardships on their own. Nevertheless, the book has some very romantic, sweet and swoon worthy scenes that you don’t really want to miss. Now, regarding the last sister, well, she will be loved by all those that like the friends/acquaintances to lovers trope.
Another character worthy to be mentioned is the heir of the DiDominzio family, Carmine. I loved he cares so much about his family. He exudes this protective alpha male aura that will grab the female attention. Honestly, it is quite surprising that the author added the brother’s story. It is quite popular to focus in the story of the sister’s. Nonetheless, it is quite refreshing to hear the make point of view of the life in the DiDomizio family and all the expectations and responsibilities it entails. After all, who said that fairy tales, even sexy and dangerous ones, don’t always need to focus or start with a damsel in distress.
Reviewer of Romance Authors That Rock
5 ❤ 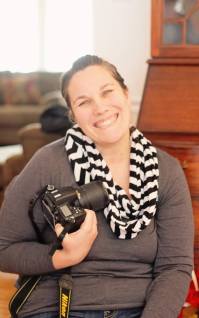 About the Author:
Lyssa Layne is first, and foremost, the proud momma to her precious daughter, AR. In addition to working full-time and being a mommy to AR, she is also an avid St. Louis Cardinals fan, a runner, blogger, and an infertility survivor.
Having watched one too many medical dramas and being inspired by author Rachelle Ayala, who introduced her to the world of indie writing, Lyssa decided to try her hand at writing a romance story.
Her attempt turned into the Burning Lovesick series. You can find Lyssa’s own interests throughout her stories although all stories are fictional.
Website:     http://www.lyssalayne.com/
Newsletter: http://eepurl.com/bq2JQn
Facebook:  https://www.facebook.com/lyssalayne
Twitter:       https://twitter.com/layne_lyssa
Pinterest:    http://www.pinterest.com/authorlyssalayn/
Amazon:     http://www.amazon.com/Lyssa-Layne/e/B00KP1Y5BY
Goodreads: https://www.goodreads.com/author/show/8280977.Lyssa_Layne
Barnes and Noble: http://www.barnesandnoble.com/c/lyssa-layne

Posted on March 13, 2017, in Paranormal Romance & Author's That Rock. Bookmark the permalink. Leave a comment.

The best books from the romance genre's best authors.

Be wicked, be sexy or just share your words... Everyone's welcome!

Love is What I See

The best books from the romance genre's best authors.

Be wicked, be sexy or just share your words... Everyone's welcome!

Love is What I See