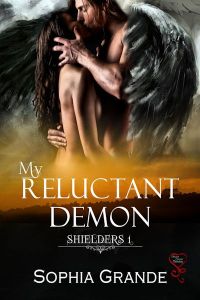 Mortal Shielder Hope Walker is good at her job. But all her training won’t do any good when it comes to dealing with lethally beautiful Alexander Nemean, a half angel-half demon being, who also happens to be her chosen mate. She has no idea if she’s doing the right thing by challenging him in his fortress, she only knows one thing—failure is not an option.

For a being as old as time, Alexander recognizes Hope as his key to survival. Once possessed by her dark passion, he also realizes that she’s the only key to his heart and soul. But as Alex fights to keep Hope safe from the denizens of Hell, he must also face the violent truths of his past.

Time to put this centuries-old nightmare to rest…

My Reluctant Demon is a first full length novel by Sophia Grande. I really enjoyed this story immensely for various reasons. It had drama, romance and suspense all wrapped inside that I couldn’t put it down. The characters were very easy to embrace and fall in love with even the ones you did not think it was possible to feel empathy for. The only thing I was a bit confused about is the status of Hope mortality, sometimes she is portrayed as an mortal and other times she is referenced as part-demon.  I was very excited to receive and review this book for several reasons the most being personally asked by the Author herself. This book is for mature audiences based on the content and I am giving it 4.5 Fangs

Greydon has two important missions: Find his brothers and rescue his people. His duty becomes complicated when he’s forced to beg a human to save his life.

Aimee Jarvis always considered her bookstore a detour to bigger things. Little did she realize her next stop would be the intriguing world of a demon prince. Yet, she finds the dangerous Greydon alluring.

While their attraction continues to burn, they both deny what their hearts already know. It will take the mystery of an ancient civilization and a shocking discovery for them to admit their desire

Taken by Desire is the first book in the Demonic series. First of all, I would like to say that if you love paranormal books with sexy royal demons, an antique prophecy and evil gods, this is the book for you. Secondly, I think that this novel has some aspects that are quite original such as the mixture of magic, demons serving the gods, Atlantis legends, magical DNA test and blood rituals. However, at some point I thought that the novel was a little too charged. The beginning was a little too rushed. One second we have our male lead and sexy demon prince celebrating his younger brother’s birthday with his parents, the next second this world is in chaos, his parents are dead and he is forced to flee the battle to save his life to fulfill a prophecy. I must confess that I was curious about the prophecy he had to fulfill and the perspective of demons that the author presented in her book. However, I some terms that were used confused me. Don’t worry, the author explains them later in the story but it really made me lose focus.
Taken by Desire tells of Greydon, a demon prince that is acclaimed by his people as their savior and destructor of Zolar, an evil god. What I loved the most about him was his loyalty to his family and his people. He was so devoted to them that it almost killed him to leave them in order to survive and fulfill his prophecy. He almost decided to give up the one female he was truly been attracted to because his first priority must always been restoring his kingdom. Besides, relationships between humans and demons, though not forbidden, were taboo. I believe that denying his feelings for a while was the normal thing to do but I truly felt that the way his relationship with our heroine lacked some fluency. I swear that some parts of the book just made me stare at the page silently because the way the hero and heroine were behaving was so random and it didn’t match the situation they were in. For example, how convenient is that a demon had a magical ancient device that tested the DNA or that you are almost dying but you use your last strength to magically make a hamburger appear? I know that our heroine was starving and shocked but even if she was hungry, you can’t use your magic recklessly when you could be too weak and could even die just to feed her.
Aimee, our heroine, owns a bookshop. She is sweet and kind and has a soft spot for defenseless and hurt creatures. It is no wonder that she helps a stranger that claimed to be a demon when he told her that if she didn’t he would die. If I was in her place I would have screamed or cried when I got teleported to a strange place with the bleeding stranger. Sure, he saved her life so the right thing to do was return the favor. Also, he was his only hope to return to her world. However, I think she took things way too pretty well, considering her circumstances. I so loved her kind soul but I agree with her best friend, Aimee has a pretty low self-esteem. For a pretty good part of the book she keeps trying to convince herself that whatever she has with Greydon will never be because she isn’t good enough. She insisted that she is no full-blooded demon or royalty. Therefore, she couldn’t be what Greydon, future king of his people, or his kingdom needs. I truly wanted to scream at her to stop worrying about such small stuff because what really matters the most is that the love is mutual. I was glad that at least one of them came to their senses. I am not telling you who exactly because it would spoil the surprise.
There is a small warning I should give you. This book can’t be read as a standalone. It is up to you to decide if you wait for book 2 to be released before starting book one or if you feel brave enough to fall in love with the story and wait for book 2.http://www.amazon.com/review/R2SQMXRT6FR7OF

The Soul Thief by Majanka Verstraete

The Soul Thief by Majanka Verstraete

When Riley is injured in a car crash and sees a girl stealing a boy’s soul, she’s convinced she’s hallucinating. But when she sees the same girl at the hospital later, she knows she wasn’t dreaming. That’s when Riley learns her secret heritage and who she really is: a halfling Angel of Death.

Riley must come to terms with her new reality and supernatural abilities, but before she can do this, girls her age start dying in mysterious circumstances. It’s up to Riley to figure out why, what the innocent victims have in common, and what she can do to stop them.

About the Author Majanka Verstraete begged her Mom to teach her how to read while she was still in kindergarten. By the time she finished fifth grade, she had read through the entire children’s section of her hometown library. She wrote her first story when she was seven years old, and hasn’t stopped writing since. With an imagination that never sleeps, and hundreds of possible book characters screaming for her attention, writing is more than a passion for her. She writes about all things supernatural for children of all ages. She’s tried to write contemporary novels before, but something paranormal always manages to crawl in. Majanka is currently studying for her Master of Laws degree, and hopes one day to be able to combine her passions for law and writing. When she’s not writing, reading or studying, she likes watching “The Vampire Diaries” and “Game of Thrones,” spending time with her friends, or playing “World of Warcraft.” http://majankaverstraete.com

“He should be dead. I thought I’d killed him. I was wrong.”

Three dead Enforcer’s in three weeks, their bodies butchered. Muse has seen it before, and when she reads the metal memories in the murder weapon, she sees it all again. Her owner, Damien, is back, and he wants what is rightfully his.

Muse escaped him, and the netherworld, once before. This time, she’s stronger, smarter. This time she knows she has the fires of hell at her fingertips, but so does Damien, and he’s not the only one. Akil is weak. No longer a Prince, he needs Muse’s limitless power to regain his title. How fortuitous then, that Akil’s fate is tied to the one man she cares the most for.

As Muse, Stefan, and Akil battle their own demons, not all will come away victorious. Some choices can never be forgiven. Some lies are never forgotten. Some wounds will never heal.

Praise for ‘Beyond The Veil’ ~ The first book in the Veil Series.

“Action-packed, raw urban fantasy that’s edgy and eclectic.”
“Steamy and sensual in places whilst heartrending and profoundly poignant & deep in others.”
“I was sucked straight into the most exciting and hugely original story that kept my interest firmly glued to the pages throughout.”

“Fighting demons is what I do; real, and those in my head.” Muse

♥ Freebies and Giveaways of all things romance ♥

Wicked or not... just share your words and images!

♥ Freebies and Giveaways of all things romance ♥

Wicked or not... just share your words and images!